The handgun is the most effective self-defense device ever invented.

Pepper sprays and taser devices are useful and better than nothing, but a handgun is far superior in serious life-threatening defense situations.  An armed victim is a criminal’s worst nightmare.  There are many cases where elderly people in their eighties and pre-teen children have sent multiple home invaders running for their lives when they produced a gun that was kept in the home.  There are even cases where a toy gun has sent a criminal running.  The NRA estimates that privately owned guns prevent two million crimes from occurring each year in the US.  The mere presence of a gun can stop a crime without a shot being fired. That’s because most criminals don’t want to find out the hard way if you’ll use it.  The right to own and carry a handgun comes from the very basic right of self-preservation.

The true purpose of handgun possession is not to cause harm or destruction.  Handguns have a constructive purpose of preventing crime and aggression.  Millions of Americans own many more millions of handguns.  Only a tiny fraction of these will ever be used against a live target.  A handgun is a tool to keep you safe and alive.  A human without weapons is just an animal of prey. Our predators can be a bear or cougar in the wild, an urban criminal gang, rioters, terrorists or the agents of a tyrannical government.

The Fallacy of Police Protection

There is a dangerous fallacy that is popular these days - that we can trust our personal safety to government employees (police). We are told that we don’t need private firearm ownership because we have police protection by dialing 911.  Police cars display mottos like “to serve and protect”.  The idea that police have a legal duty to protect you is a fallacy. The Courts have established that the police have no legal duty to protect anyone.  The duty of law enforcement is to identify and arrest suspects after a crime has been committed. They’ll protect you if you’re still alive and a crime is in progress;  but too often, they arrive only to draw the chalk outline around your body.  And if they catch the person who did it, they’ve done their job.

Consider the LA riots of 1992.  In the riot areas, the police were nowhere to be found.  Korean shopkeepers were left to defend themselves and their businesses until the National Guard arrived.

With public safety budgets in crisis, criminals are released early to the streets.   Fewer police officers and parole agents are available to control them.  Police response times get longer and criminals know this. When they invade your home, they know they have enough time to rape and murder until someone with a gun shows up – unless you have a gun. Then the criminal is out of time.

The Fallacy of Gun Control

There is another dangerous fallacy that is popular today – that gun control laws make the public safer.  In reality, gun control laws only restrict what law-abiding citizens can own.  There isn’t a criminal around that gives one wit about obeying gun laws.  Cocaine is illegal but there is plenty of it around. The same is true of illegal weapons. If tons of cocaine can be smuggled in, so can illegal weapons. Criminals buy, own and carry whatever they want. You are the only one restricted by gun laws. The result of this is that gun laws only make criminals safer, not you. It’s been well documented that the areas with the most restrictive gun laws are usually areas with the highest crime rates. This is no surprise. When concealed carry laws allow citizens to be armed in public, crime rates go down. That’s because criminals don’t know who’s armed. This is really just common sense.

The best example of the failure of gun control is England.  England has the most restrictive gun laws of any Western nation, yet they are awash in violent street crime.  England’s violent crime rate is three times that of the US. The irony of this is that through harsh sentencing laws they have eliminated guns as the tool of choice for street crime, so criminals have gone to the next best thing – knives. Knife crime has skyrocketed and thrives because criminals know their victims won’t have a knife or a gun.  England’s citizens are the most disarmed in the western world.  As a result, they are the most victimized.

History shows us that people who are armed make the rules for those who aren’t.   Ultimately, there is no right or freedom that can be put on paper that can’t be over-ruled by armed force.  The right of private gun ownership is fundamental to self-governance by a free people.

Private gun ownership provides self-protection and prevents crime and aggression.  Gun control laws make criminals safer – not you. Police are not public security guards and have no duty to protect you.  Lastly, private gun ownership gives real meaning to the phrase “government by the consent of the governed”. 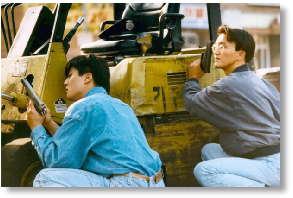 “There are two valuable lessons from the Los Angeles Riots.  First, civilization has a very, very thin veneer that can break down with very little warning (there were sympathy riots up and down the West Coast and unrest in other urban areas). Second, when civilization does break down, law enforcement is virtually powerless for a time during which a judicious exercise of one’s Second Amendment rights may be all that stands between you and destructive anarchy”